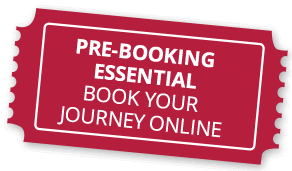 Transport yourself to 1944 where preparations for D-Day are in full swing with troops travelling to their holding points or deployed on manoeuvres, vehicles and supplies being transported around the country to staging points in preparation for the pending invasion of Europe.

Take a steam train journey along the line to discover what life was like in Britain and occupied Europe during the war. Each station along the line will take on the identity of a different location where there will be a wide variety of interactive attractions along with costumed re-enactors who will be on hand to help tell the wartime story.

Kingsley & Froghall station is the current southern terminus of operations with the station area itself having recently been incorporated into the ever-expanding Froghall Military Camp. With preparations for D-Day in the full swing the station and camp has become a hive of activity with both personnel and equipment arriving for manoeuvres in the Moorlands in preparation for the forthcoming operation. Military personnel from the camp are also providing additional protection to the former Thomas Bolton Copperworks site that has become a top-secret storage facility for military equipment – remember careless talk costs lives!

Key attractions at Kingsley & Froghall include:

This once backwater village has turned into a hive of activity since it has become the hub of operations for the British Forces who have set up their command post here while they are undertaking key training in preparation for operations in Europe.

Key attractions at Consall include:

Welcome to occupied Europe! This formerly quaint French village had been under occupation for around four years but has recently been liberated by allied forces. Life is starting to get back to normal with the villagers going about their everyday life going to the hairdressers, visiting the local shops and relaxing in the café at the station. There are rumours circulating that Axis forces are regrouping and may attempt to retake the village. Is the Villages [peaceful life about to be disturbed again and who will win the final battle for Nouvion?

Key attractions at Nouvion include:

On the Friday, Saturday and Sunday evenings the Allied Forces will be hosting numerous events to entertain the troops and local villagers in the spirit of raising moral and keeping the home fires burning.

Enjoy live musical entertainment on the station concourse to get you ‘In the Mood’ for the forthcoming weekend. While taking in the music and atmosphere why not enjoy some refreshments available from The Signal Tearoom or an off the ration book alcoholic beverage from The Spiv’s Bar. If you feel like a journey down the line to get a preview of some of the attractions at the other stations then a train service will be running into the early evening.

Nothing takes you back to the atmosphere of the 1940’s like a live big band performing all the great hits from the war years. Guaranteed to get your feet tapping and your legs swinging, sit back and enjoy the music or even get up and dance along. If you’ve never danced The Charleston Step or The Jive but fancy giving it a go then please join in with the dance lessons that will be part of the show. Refreshments will be available from The Spiv’s Bar and Signal Tearooms.

Join us for a star-studded evening in the Churnet Valley Railway’s Salute to the 1940’s. With performances from Vera Lynn, George Formby, Gracie Fields, The Andrews Sisters and other tribute acts this is sure to be a night to remember. Feel free to sing-a-long, tap your feet or get up and have a dance as the acts perform the hits of the era. Refreshments will be available from The Spiv’s Bar and the Signal Tearooms.

With the event being aimed as a family fun event we do ask that visitors wishing to join in with the weekend’s activities pay respect towards the history of this time period. For this reason, we ask that no one is to wear the uniform of the Nazi party including the Swastika, the uniform of the Gestapo or the uniform of the black Allgemeine SS. Anyone found to be in contravention of this request will be removed from the event without the right of a refund. This extends to anyone who attempts to dress as personnel directly associated with said organisations.

Whilst we appreciate there were two sides to the war we want to ensure that some of the horrors that did occur during this time are not glorified and that consideration is shown towards what was one of the biggest tragedies the world has ever seen.